The Choir “Le Voci Bianche di Novara,” in its more than 30 years of life deserved by critics and audiences, the statement “one of the children choir most interesting and versatile of the Italian scene.”

The choir participates frequently in concerts, music festivals, cultural and artistic activities across the country. It is often invited to perform on television programs, even alongside soloists, for meetings and events, folk and religious festivals, musical events and festivals. Often participates in competitions, confirming its status with flattering support.

The repertoire ranges from classical music and popular music, from ancient to contemporary expressions chorale melodies, sacred and profane, the operatic repertoire with acquaintances and polyphonic.

Collaborate regularly with artists such as Franco Fasano (for the samples of the songs of the competition “Lo Zecchino D’Oro” of the Antoniano of Bologna and the broadcasts of Radio Baby) and Danilo Amerio (with which they made the song “Il Mercato degli Angeli”, campaign to fight against pedophilia on the Internet, promoted by Blue Phone)

The Choir is the interpreter of the song “Adiemus”, used as the theme song for ‘Mother Nature’ in the program “Hello Darwin” P. Bonolis and L. Laurenti, for five editions, as well as, more recently, as the theme music of the Athens Olympics (2004).

In 2004 “Le Voci Bianche di Novara” sang at “La Scala” in Milan (Arcimboldi Theatre), at the opening of the “Eighteenth meeting of representatives of different religions and cultures of the world”, organized by the Diocese of Milan and the Community of S. Egidio. In September 2004, took part in a peace concert in “Piazza del Duomo”, broadcast by RAI, RAISAT, TELEPACE, Telenova and some satellite TV world

The choir has participated in various charity concerts and several editions of the “Befana dei Carabinieri in Monza”, alongside major figures such as Francesca Senette, the Fichi d’India and the troup of “Amici”. Also in 2007 was invited to sing at the Epiphany of Brigade of Milan, with Chiara and Cino Tortorella and Gabibbo. In 2007 it’s participated in the event “Canta la Vita” with Danilo Amerio and Andrea Mingardi, broadcast by RAI within the program “L’Italia sul Due.” In December of the same year, the choir has been participating in a tour in Rome singing in major churches and theaters, including the St. Peter’s Basilica (Vatican City).

The choir takes on average about fifty concerts a year.

In 2011 it’s attended the celebrations of the 150th anniversary of the Unification of Italy, performing in front of President of the Republic Giorgio Napolitano, part of the “Working Capital – Telecom Italy”, held at the “Officine Grandi Reperti” of Turin and on national RAI History. 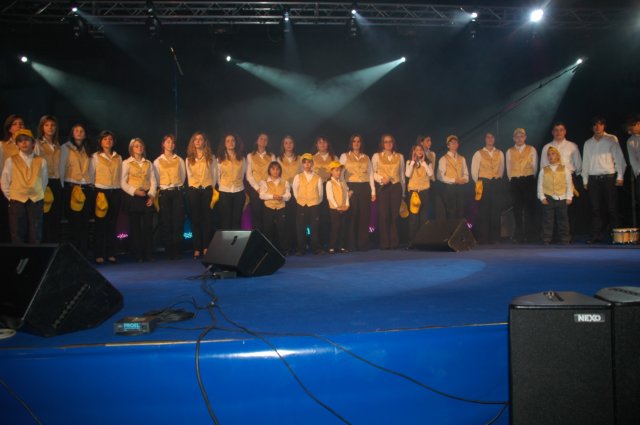