“Adiemus is a path,  a journey that starts from the roots of the music, with the  percussion that supports, accompanies,  emphasizes and organizes our existence, our pace. It is a flight of voices, the sweet caress of a flute. It ‘a cry of desire to horizons, a wind, a need for peace, a breath, an enveloping blanket of harmony, but also of dissonance, arrhythmias, restless phrases, stubborn, … of silence. Adiemus is the scent of nature concoction of colors, sunrises, sunsets, mist. Adiemus is a reflection, a moment of intimacy, meditation. It is a prayer. ” 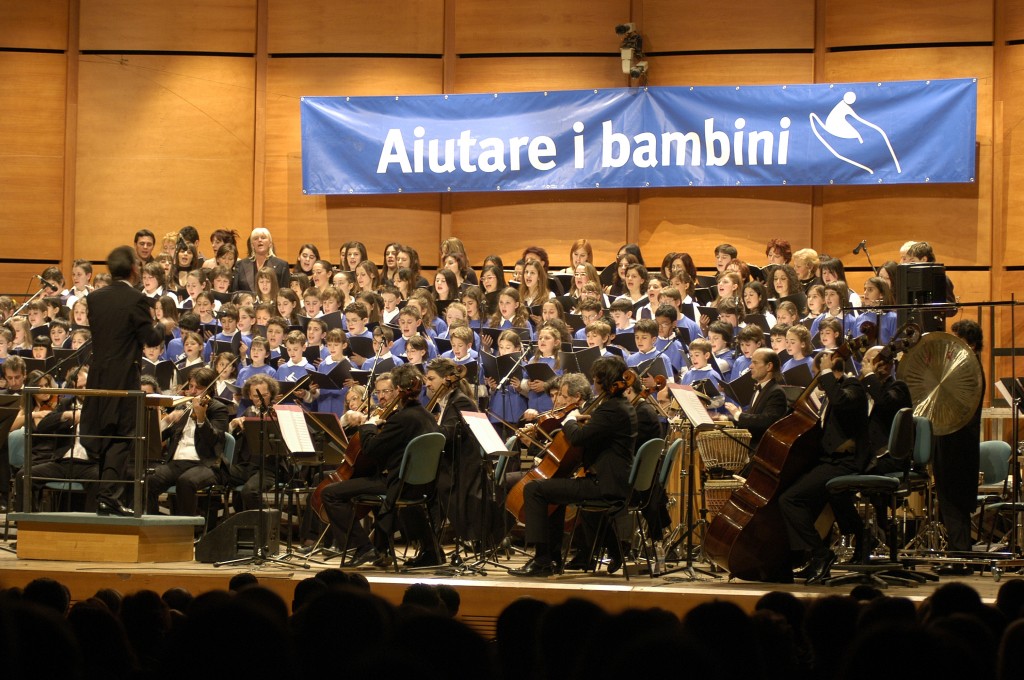 “Sanctuary” means “place of refuge”. The music is a place of refuge, but not because of  introspective or dark. We help the emotions to be extended and expanded, we help them to expand into infinity.

It is a type of choral composition based on the European classical tradition, but where the sound of the human voice is more akin to ethnic or “world”.

The original idea of Karl Jenkins was to have thematic unity within the composition, rather than a collection of different pieces in the form of song.

The structures of the “Songs of Sanctuary” are affected by the classical form, for example modified rondo, ternary, air with a “over again”. This is of great importance due to the lack of lyrical message that supports the conventional form of singing.

The text was written phonetically with the words viewed as instrumental sound, in order to maximize the level of “melisma” (a phrase expressive voice), removing the distraction, if you can call it that, of the words.

The sound is universal, since it is the language of music.

The solo voices are essential to this, not only for their beauty but also for the variety and the intonation controlled and perfect that both possess. In addition, the score, which in some cases dares, in the part of “contralto”, reaching an unusual range of low notes, offers the possibility to get unique sounds for quality color and thickness. Parties “a solo” are sung sometimes in an ecclesiastical way, sometimes in a Celtic way.

The author wishes that the voices of the choir, as well as those of children than those of the female choir, to become “tribal”, so they are asked to sing loud, without vibrato. If you listen to ethnic music tribal (Maori, African), this is the characteristic of the genre.

The world premiere live “Adiemus: Songs of Sanctuary” was presented at the Teatro Coccia in Novara, with the patronage of the President of the Republic and the patronage of the Municipality and the Province of Novara, in the Universal Day of child, sponsored by UNICEF.

The performance is made possible thanks to the valuable and enthusiastic availability of so many people who believed in this wonderful music was unknown and they immediately loved, note by note.

Isabella Casucci which turns the color of Adiemus giving the first few notes, is a delightful vocalist, working for some time on the side of Giorgia, backed by significant experience jazz and rhythm & blues artists such as Stefano Cerri, Paolo Pellegatti, Gian Paolo Casati, Marcello Tonolo, Maurizio Caldura, the Paul Jeffrey Big Band, Soul Band FBL.

Giorgio Merati expresses the flutes his great artistic sensibility. Comes from concert experiences as a soloist and in the most prestigious European orchestras. His natural use of ancient instruments has often led to the execution of sophisticated music. Enters frequently in the world of ethnic and popular music.

The Orchestra Sinfonica Carlo Coccia, founded in 1994, has worked with conductors such as Giuseppe Garbarino, Bruno Aprea, Massimiliano Warm, Marcello Rota, Paolo Gatto, Aldo Tarchetti and fine choirs, including, frequently, the  Theater  Scala’s Choir. Its  repertoire ranges from baroque to classicism (with chamber music), until the romance and contemporary scores, with frequent appearances in opera seasons of important Italian and foreign theaters.

The Choir “Le Voci Bianche di Novara” was born in 1980 by the will of Maestro Paolo Beretta,  since then instructs and directs it with great enthusiasm and professionalism. It is currently composed of fifty boys and girls, from 5 years of age. It has a repertoire that ranges from classical music and popular music, from ancient melodies to contemporary expressions with acquaintances of music literature and polyphonic choral lyric. It has participated in many music festivals, radio and television and has to its credit some recordings.

The Choir “Arcobaleno”, a young vocal training came from “ex Voci Bianche”, together with several other young people, has a repertoire of light music, spirituals, gospel, and musical. Often is accompanied, on special occasions, the choir of children.

Paolo Beretta, pianist and conductor, after several experiences as a concert soloist, specializing in chamber music and accompanying the singing and ballet, theater, opera and choral music. He has often worked in the major Italian opera houses, including La Scala and the Arena di Verona. Arranger and conductor jazz ensembles, often composer of music for advertising, television and cinema. He has always dedicated itself to education of children’s Voice, and has for years worked with the Antoniano of Bologna.

Francesco Iorio, pianist, organist and choir director, has for years been at the helm of  Novaria Choir and of the Lyryc and  Polyphonic Choir of  Civic Music Institute Brera in Novara.

Matteo Spina, teacher and concert pianist greatly appreciated, keyboardist and arranger, is a Maestro assistant and substitute in this production.

Franco Campioni, percussionist, composer, jazz musician, teacher at the “Conservatorio Verdi di Milano” and a member of some of the most important Italian orchestras, including the Academy of Santa Cecilia, was responsible for the revision and arrengment percussion  work of Jenkins.

Bruno Polver, known and appreciated artist and communicator. With Barbara Polver, painter and set designer and Valeria Piasentà creative and sensitive designer have created the paintings “Adiemus” and the images that accompany the concert.